The principle surviving ancient features are the lower stages of the tower (with heavily eroded stonework) and the Romanesque arcade on the north side of the nave and chancel. The font is also of possible 12th century date and there is a 15th century piscina reset in the south wall of the chancel.

Within the tower is a peal of eight 18th century bells, cast by Lester and Pack (now the Whitechapel Bell Foundry). The clock was installed in 1897 to celebrate Queen Victoria’s Diamond Jubilee. The church history also mentions a Romanesque carving of a seated ecclesiastic in the tower. The tower arch is of 15th century date; this has been enclosed by a 19th century timber and glass screen within which is set a round arched stained glass window depicting Our Lady within a mandorla, brought from St Mary’s.

The building was considerably altered and added to in the 19th century, when it was de-Georgianised (flat plaster ceiling in the nave removed), the tower raised by one stage and the previous short stumpy spire rebuilt and the nave roof rebuilt. A major restoration campaign in 1907 involved the refenestration of the north elevation and the rebuilding of the south side of the nave and chancel.

The 1988-9 reordering has involved the introduction of a dais and altar in the middle of the nave on the south side, with the seating (pine pews) arranged around it. The old chancel has been retained as a Blessed Sacrament chapel, with an open screen to offer a degree of demarcation. This radical reordering has been achieved without loss of important fabric or structure, and achieves an intimacy of worship (as well as allowing for full participation in the liturgy by those using wheelchairs).

Romanesque carving of a seated ecclesiastic 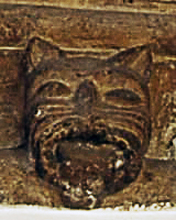